On top of Kubernetes ReplicaSets, OpenShift gives us even more support for software lifecycle with Deployments. A Deployment creates a ReplicaSet and has the added benefit of controlling how new deployments get triggered and deployed.

Deployments are sufficient for deploying a production service

Deployments manages ReplicaSets which in turn manages a set of Pods

Below is an example Deployment:

Let’s look at the individual parts of this definition, under spec.

Here is an example completed Deployment.

As with other objects in OpenShift, you can create this Deployment with oc create -f {FILE_NAME}.

Once created, you can check the status of the ongoing deployment process with the command

To get basic information about the available revisions, if you had done any updates to the deployment since, run

You can view a specific revision with

For more detailed information about a Deployment, use

To roll back a deployment, run

When using the web interface, you can view and edit a Deployment, from the sidebar, go to Applications, then Deployments.

You can get info on any deployment by clicking on it.

To edit this configuration, click Actions in the upper right hand corner, then Edit on whatever you wish to edit, or Edit Deployment if you’d rather edit the YAML directly. 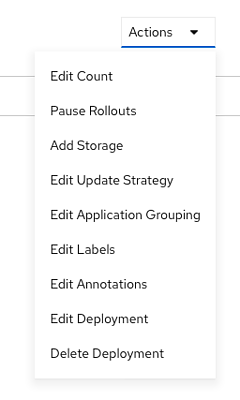 All of the below strategies use readiness checks to determine if a new pod is ready for use. If any readiness check fails, the deployment configuration will continue to try to run the pod until it times out. The default timeout is 10m. This value can be set in deployment.spec.strategy.params.TimeoutSeconds

The default strategy, if omitted, is RollingUpdate

A rolling deployment slowly replaces instances of the previous version with instances of the new version. This deployment waits for new pods to become ready before scaling down the old replication controller. This strategy is easily aborted and reverted.

A rolling deployment is best used when you want to take no downtime during an update, but you know your application can support having old and new code running at the same time.

Here is an example Rolling deployment:

These values can be used to tune a deployment for speed or availability. If you want to maintain full capacity, set maxUnavailable to 0. The maxSurge value can be used to speed up the scale up. Note that you still must stay below your project’s pod quota.

A RollingUpdate strategy follows this sequence:

During the scale down, the strategy waits for pods to become “ready” to determine if scaling down more will affect availability. If the new pods don’t become “ready”, the deployment will eventually time out and revert to the old deployment.

A recreate deployment scales the previous deployment down to 0 before starting the new deployment. This is best used when a downtime is acceptable, and your application cannot handle having the old and new versions running at the same time.

Here is an example recreate deployment:

The recreate strategy follows this sequence:

Since routes are intended for HTTP and HTTPS traffic, these strategies are best used for web applications.

Blue-green deployments are defined as running two versions of an application at the same time, then moving traffic from the old production version (the green version) to the new production version (the blue version). You could use a Rolling Deployment Strategy for this, but for the sake of showing how route-based deployments work, we’ll use a route.

Blue-green deployment requires that your application can handle both old and new versions running at the same time. Be sure to think about your application and if it can handle this. For example, if the new version of the software changes how a certain field in a database is read and written, then the old version of the software won’t be able to read the database changes, and your production instance could break. This is known as “N-1 compatibility” or “backward compatibility”.

The below examples use commands to create everything for demonstration purposes but the general best practice is to use yaml files for for all your deploying and configuration.

A/B Deployments are a popular way to try a new version of an application with a small subset of users in the production environment. With this strategy, you can specify that the older version gets most of the user requests while a limited fraction of users get sent to the new version. Since you can control the amount of users which get sent to the new version, you can gradually increase the volume of requests to the new version and eventually stop using the old version. Remember that deployment configurations don’t do any autoscaling of pods, so you may have to adjust the number of pod replicas for each version to deal with the increased/decreased load.

As with blue-green deployment, A/B deployments require that your application has N-1 compatibility.

To set up an A/B environment:

For more information, checkout the upstream kubernetes doc on Deployments and the Openshift doc on Route based deployment strategies.