This guide has been shortened and adapted from a challenge in OLCF’s Hands-On with Summit GitHub repository (Python: CuPy Basics).

The guide is designed to be followed from start to finish, as certain steps must be completed in the correct order before some commands work properly.

This guide teaches you how to build CuPy from source into a custom conda environment on Summit. Although Summit is being used in this guide, all of the concepts still apply to other OLCF systems.

In this guide, you will:

GPU computing has become a big part of the data science landscape, as array operations with NVIDIA GPUs can provide considerable speedups over CPU computing. Although GPU computing on Summit is often utilized in codes that are written in Fortran and C, GPU-related Python packages are quickly becoming popular in the data science community. One of these packages is CuPy, a NumPy/SciPy-compatible array library accelerated with NVIDIA CUDA.

CuPy is a library that implements NumPy arrays on NVIDIA GPUs by utilizing CUDA Toolkit libraries like cuBLAS, cuRAND, cuSOLVER, cuSPARSE, cuFFT, cuDNN and NCCL. Although optimized NumPy is a significant step up from Python in terms of speed, performance is still limited by the CPU (especially at larger data sizes) – this is where CuPy comes in. Because CuPy’s interface is nearly a mirror of NumPy, it acts as a replacement to run existing NumPy/SciPy code on NVIDIA CUDA platforms, which helps speed up calculations further. CuPy supports most of the array operations that NumPy provides, including array indexing, math, and transformations. Most operations provide an immediate speed-up out of the box, and some operations are sped up by over a factor of 100 (see CuPy benchmark timings below, from the Single-GPU CuPy Speedups article). 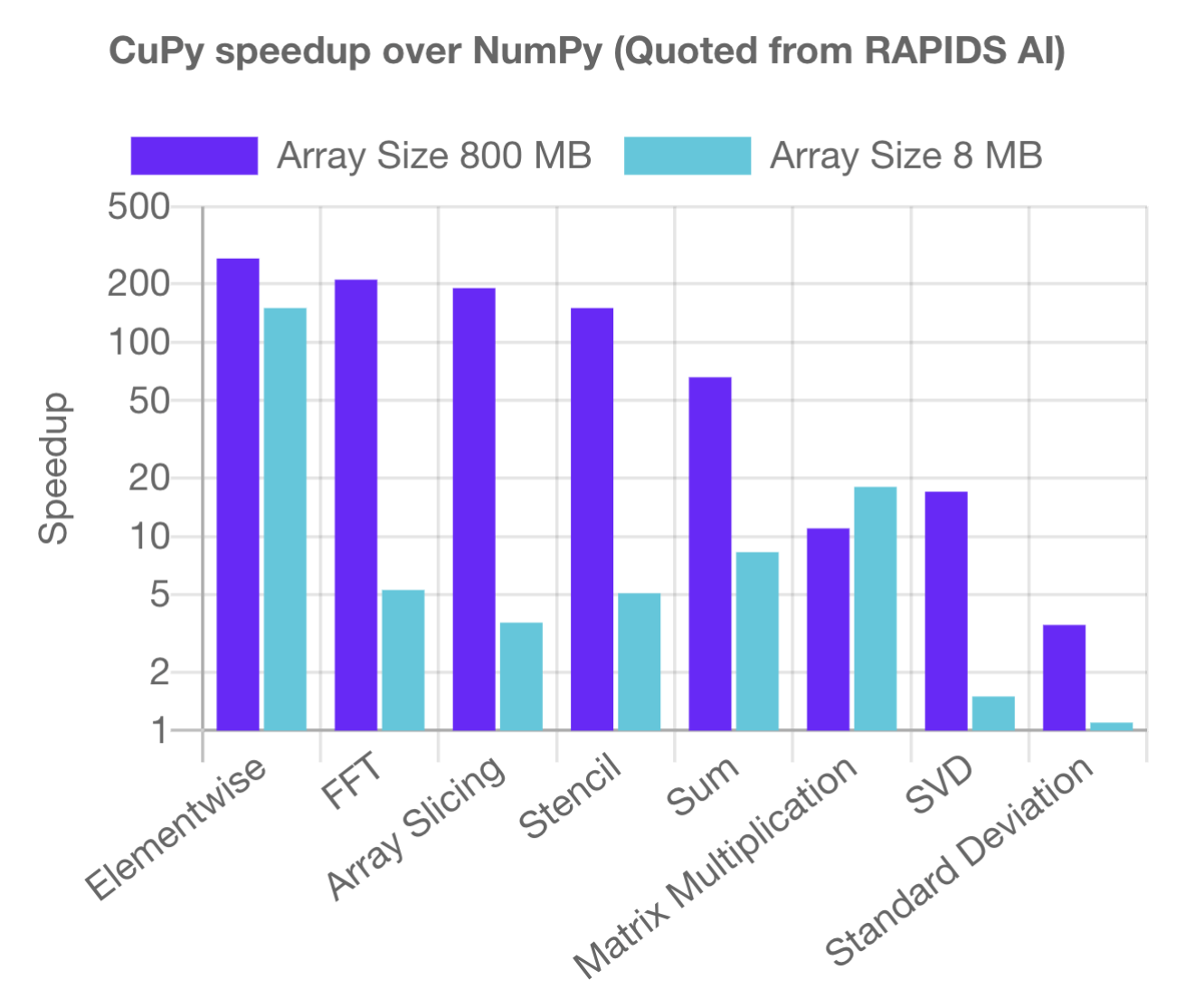 Because each Summit compute node has 6 NVIDIA V100 GPUs, you will be able to take full advantage of CuPy’s capabilities on the system, providing significant speedups over NumPy-written code.

Before setting up your conda environment, you must exit and log back in to Summit so that you have a fresh login shell. This is to ensure that no previously activated conda environments exist in your $PATH environment variable.

Building CuPy from source is highly sensitive to the current environment variables set in your profile. Because of this, it is extremely important that all the modules and conda environments you plan to load are done in the correct order, so that all the environment variables are set correctly. First, unload all the current modules that you may have automatically loaded on Summit and then immediately load the default modules.

Next, load the gnu compiler module (most Python packages assume GCC), cuda module (necessary for CuPy), and the python module (allows you to create a new conda environment):

Loading the python module puts you in a “base” conda environment, but you need to create a new environment using the conda create command:

As noted in the Python on OLCF Systems page, it is highly recommended to create new environments in the “Project Home” directory.

After following the prompts for creating your new environment, you can now activate it:

CuPy depends on NumPy, so let’s install an optimized version of NumPy into your fresh conda environment:

After following the prompts, NumPy and its linear algebra dependencies should successfully install.

Next, install SciPy. SciPy is an optional dependency, but it would allow you to use the additional SciPy-based routines in CuPy:

Finally, install CuPy from source into your environment. To make sure that you are building from source, and not a pre-compiled binary, use pip:

The CUDA_PATH flag makes sure that you are using the correct path set by the cuda module, while the CC and NVCC flags ensure that you are passing the correct wrappers. Note that, if you are using the instructions for installing CuPy with OpenCE below, the cuda/11.0.3 module will automatically be loaded. This installation takes, on average, 20 minutes to complete (due to building everything from scratch), so don’t panic if it looks like the install timed-out. Eventually you should see output similar to:

If you wish to use CuPy within a clone of the OpenCE environment, the installation process is very similar to what we do in the regular CuPy installation we saw above.

Next, install CuPy the way you did before. This installation will use the system GCC /usr/bin/gcc which is currently 8.3.1.

Now, everytime you want to use this environment with CuPy on a new login or in a job, you will have to do the sequence of the following

When a kernel call is required in CuPy, it compiles a kernel code optimized for the shapes and data types of given arguments, sends it to the GPU device, and executes the kernel. Due to this, CuPy runs slower on its initial execution. This slowdown will be resolved at the second execution because CuPy caches the kernel code sent to GPU device. By default, the compiled code is cached to the $HOME/.cupy/kernel_cache directory, which the compute nodes will not be able to access. It is good practice to change it to your scratch directory:

Before you start testing CuPy with Python scripts, let’s go over some of the basics. The developers provide a great introduction to using CuPy in their user guide under the CuPy Basics section. We will be following this walkthrough on Summit. The syntax below assumes being in a Python shell with access to 4 GPUs (through a jsrun -g4 ... command).

As is the standard with NumPy being imported as “np”, CuPy is often imported in a similar fashion:

Manipulating a CuPy array can also be done in the same way as manipulating NumPy arrays:

Useful functions for initializing arrays like np.linspace, np.arange, and np.zeros also have a CuPy equivalent:

CuPy has a concept of a “current device”, which is the current activated GPU device that will operate on an array or where future arrays will be allocated. Most of the time, if not explicitly declared or switched, the initial default device will be GPU 0. To find out what device a CuPy array is allocated on, you can call the cupy.ndarray.device attribute:

To get a total number of devices that you can access, use the getDeviceCount function:

The current device can be switched using cupy.cuda.Device(<DEVICE_ID>).use():

Similarly, you can temporarily switch to a device using the with context:

Trying to perform operations on an array stored on a different GPU will result in an error:

To solve the above error, you must transfer x_gpu_0 to “Device 1”. A CuPy array can be transferred to a specific GPU using the cupy.asarray() function while on the specific device:

A NumPy array on the CPU can also be transferred to a GPU using the same cupy.asarray() function:

To transfer from a GPU back to the CPU, you use the cupy.asnumpy() function instead:

Associated with the concept of current devices are current “streams”. In CuPy, all CUDA operations are enqueued onto the current stream, and the queued tasks on the same stream will be executed in serial (but asynchronously with respect to the CPU). This can result in some GPU operations finishing before some CPU operations. As CuPy streams are out of the scope of this guide, you can find additional information in the CuPy User Guide.

Now that you know how to use CuPy, time to see the actual benefits that CuPy provides for large datasets. More specifically, let’s see how much faster CuPy can be than NumPy on Summit. You won’t need to fix any errors; this is mainly a demonstration on what CuPy is capable of.

There are a few things to consider when running on GPUs, which also apply to using CuPy:

These points are explored in the example script timings.py:

This script times the decomposition of a matrix with 9 million elements across four different methods. First, NumPy is timed for a 3000x3000 dimension matrix. Then, a 3000x3000 matrix in CuPy is timed. As you will see shortly, the use of CuPy will result in a major performance boost when compared to NumPy, even though the matrices are structured the same way. This is improved upon further by switching the data type to float32 from float64 (the default). Lastly, a 9000x1000 matrix is timed, which contains the same number of elements as the original matrix, just rearranged. Although you may not expect it, the restructuring results in a big performance boost as well.

Before asking for a compute node, change into your GPFS scratch directory:

Let’s see the boosts explicitly by running the timings.py script. To do so, you must submit submit_timings.lsf to the queue:

After the job completes, in cupy_timings.<JOB_ID>.out you will see something similar to:

The exact numbers may be slightly different, but you should see a speedup factor of approximately 2 or better when comparing “GPU time” to “CPU time”. Switching to float32 was easier on memory for the GPU, which improved the time further. Things are even better when you look at “GPU float32 restructured time”, which represents an additional factor of 4 speedup when compared to “GPU float32 time”. Overall, using CuPy and restructuring the data led to a speedup factor of >20 when compared to traditional NumPy! This factor would diminish with smaller datasets, but represents what CuPy is capable of at this scale.

You have now discovered what CuPy can provide! Now you can try speeding up your own codes by swapping CuPy and NumPy where you can.