A pod is the smallest unit in Kubernetes, it is a grouping of containers that will be scheduled together onto a node in the cluster. usually it will just be one container but it could be a group of processes that make up an application.

Pods have a lifecycle: they are defined, scheduled onto a node, and then they run until their containers exit or the pod is removed from the node for some reason. Pods are immutable and changes to a pod are not persisted between restarts.

A pod does not:

Running a Container in a Pod with the CLI

The --restart=Never tells oc run to generate only a Pod spec. By default it would generate something more advanced we will talk about later.

The openshift/hello-openshift is just a simple Docker image

Get more information on our pod:

Once we see Status: Running (near the top of the output, not the bottom) we can interact with the container by first setting up port forwarding:

Then, since oc port-forward stays in the foreground, we run curl http://localhost:8080 in a second terminal.

The initial port in the port pair references a non-allocated port on our local system similar to how SSH port forwarding works.

Pods also have logs. And we can see the logs for the pod: (whatever was printed to stdout from within the container, not kubernetes).

Deleting the pod will remove our ability to inspect the log output from oc logs so if you are debugging an issue you will want to keep the pod until the issue is resolved.

Running a Container in a Pod with the Web Console

First, in the upper right-hand corner, click the + symbol. This can be used to add any YAML object from the web UI. 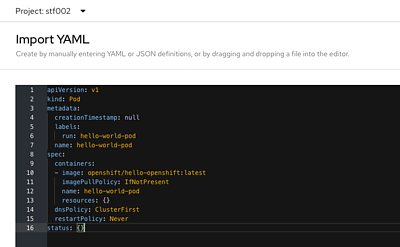 Click “Create” at the bottom of the screen, and you will be redirected to the pod object page. Wait for this to say “Running” on the right side of the screen in the Status field. 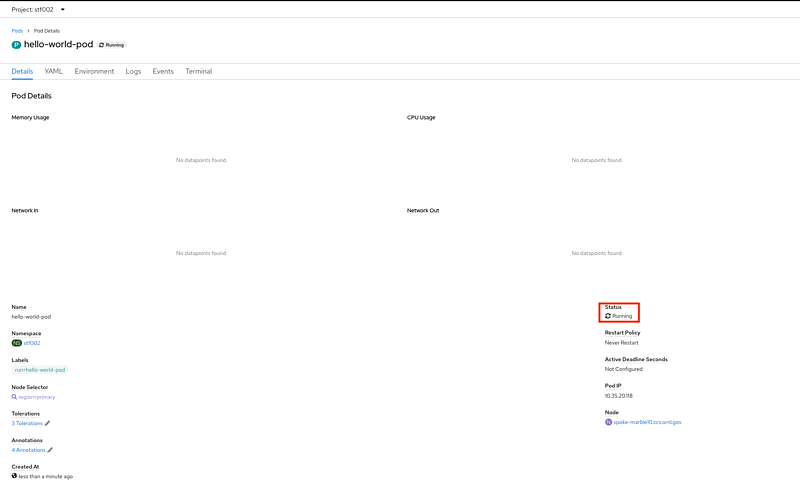 Finally we can delete the pod by clicking Actions -> Delete Pod